How to improve EMC with FEA

This article explains in more detail what Electromagnetic compatibility (EMC) is, how it benefits your systems and how FEA can help you improve it.

Electrical devices are all around us and many of these devices emit electromagnetic energy. This electromagnetic energy may cause disturbances such as electromagnetic interference (EMI), which cause a decrease in performance and loss of information. For example medical equipment in hospitals may suddenly fail without triggering any alarms, creating a life-threatening situation. This can be prevented by achieving electromagnetic compatibility (EMC) between various systems and devices. This article will explain in more detail what EMC is, how it could benefit you and how FEA can help you achieve it.

Electromagnetic compatibility (EMC) is described as a state that exists when all electrical devices in a system operate together without any errors. This means EMC between devices prevents unintentional interference by looking at the emission of the energy, the susceptibility of the electrical equipment and the coupling, which is the mechanism through which the interference reaches the affected equipment.

Elements of an EMC issue

Incidents where systems malfunction without an apparent cause are not rare and are usually the result of electromagnetic interference, which prevents EMC between devices. There are three elements that make up an EMC issue: 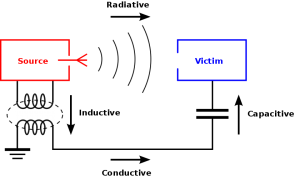 The source could be any electrical device, let’s consider a telephone for example. The telephone emits electromagnetic waves, which makes the coupling method radiative coupling. The victim in this example is an analog television. The quality of the broadcast decreases and sometimes sparks could even be generated. In this example both the source and the victim act as radio antennas and both devices are trying to receive information via electromagnetic waves. Because of these multiple waves, information gets lost and so electromagnetic interference occurs. 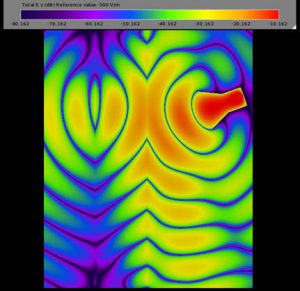 EMI and other disturbances may become an increasingly more occurring problem, especially in complex systems. As an engineer, you want all of your electrical devices to operate together without fail. By understanding how electromagnetic energy is emitted, damage to these devices can be prevented.

With FEA you can analyze the complex electromagnetic environment of your product. With specialized modeling and analyses workflows you can deal with thermal, fatigue, bearing currents and EMC challenges from the very beginning of the design and engineering phase. The goal is to understand and improve the electromagnetic interaction between devices and components and we at Femto can help with that. Our engineers are FEA specialists and experienced with a variety of simulation tools from the Simcenter Portfolio. Please don’t hesitate to ask us any EMC related questions!

We hope this helps. Thanks for reading!  If you enjoyed this article, say hello to us on Twitter, Facebook or LinkedIn. Or sign up for our monthly newsletter on our site.