In this article we share our insights on how to generate new design directions with help of topology optimization. 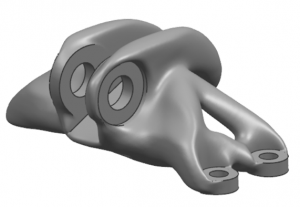 Optimizing parts through topology optimization without applying manufacturing constraints will result in organic looking designs (see image on the left). This is because the material will choose the shortest path from the load to the constraint, resulting in the most efficient shape mathematically. Organic results give a good understanding of the functional requirements of the part.

When the optimized part needs to be produced through conventional production methods like casting or milling, manufacturing constraints and/or symmetry patterns can be applied in order to avoid cavities and impose the desired conditions.Topology optimization is an important tool in simulation driven design.

An also important step is the determination of the optimization objective. This step defines what we want to achieve with the optimization. Most of the time with topology optimizations it is the case that we want to maximize the stiffness while minimizing the volume of the model. The increased stiffness is achieved by minimizing the strain energy in the model. It is also possible to optimize towards other objectives such as certain Eigenfrequencies or local displacements.

Using the power of topology optimization, Femto engineers were able to achieve a 20% more cost efficient M-Frigates Radar mast design for DMO. You can read more about the DMO case study here. If you are interest in our product optimization services or need advice on methods, tools and procedures, we’d like to hear from you!